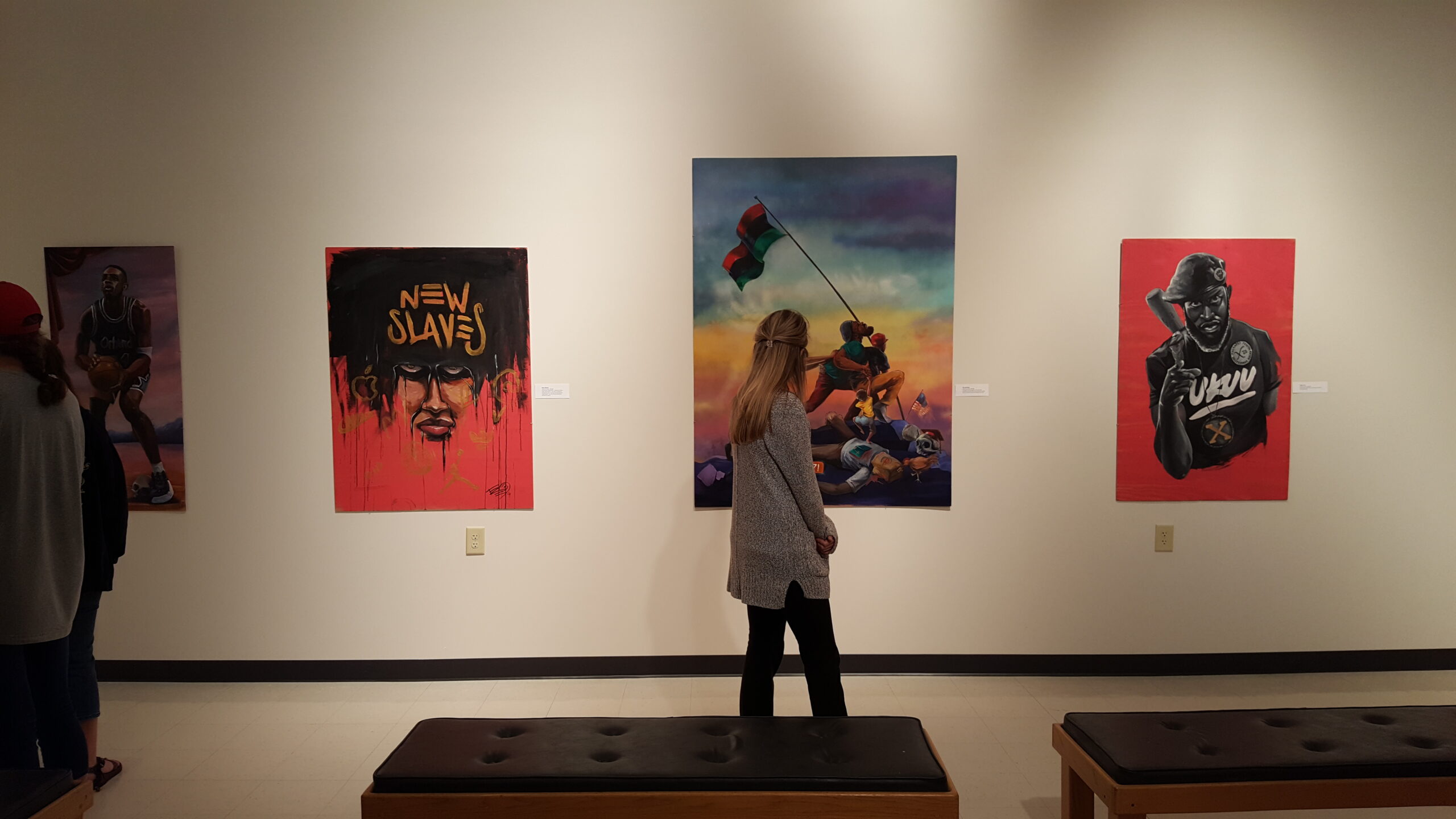 The Stevens Art Gallery showcased “Through Colored Lines,” an exhibit by Tramaine “Tre” Wilkes (’13), from Oct. 20-Nov. 4, 2016, as part of the annual alumni art show during Homecoming. The display featured artwork Wilkes created in response to recent shootings, demonstrations and racial tensions. The exhibit was brought to campus to give voice to the black experience in America and students at Harding. The gallery featured both Wilkes’ work and that of Eric Kee (’02), a Navajo artist and minister to the Navajo people in Tuba City, Arizona. Kee’s work included carved wood sculpture, Native American flutes, jewelry, paintings and ink drawings based on his cultural heritage.

“This collection of paintings is meant to start dialogue among all communities,” an introduction from Wilkes at the exhibit stated. “I want the viewer to ask ‘Why?’ If there is no question, then there is no reason for exploration or discussion.”

Drawing inspiration from Renaissance and Mannerist artists, Wilkes’ work takes a classical approach to modern subjects. Several of his pieces stemmed from community collaboration as Wilkes travels and paints in public. Touching on topics such as tensions between the black community and law enforcement, black-on-black crime, and the role of family in society, “Through Colored Lines” sparked conversation across campus as students, faculty, staff and University guests visited the gallery.

According to Jewels Edmerson, the University’s Black Student Association president, the exhibit was a positive continuation of a campus dialogue about race that began with ASI’s race relations panel in February 2016. Edmerson said the organization toured the exhibit together.

“Words cannot describe the intense emotion felt,” Edmerson said. “Most of our group stayed more than an hour. I believe it was very beneficial and therapeutic for black students to see their University acknowledge these events and allow artwork that could be controversial.”

John Keller, professor of art and gallery curator, said that being an alumnus made Wilkes’ work particularly impactful to some.

“One student said that she never felt like she belonged at Harding until this show,” Keller said. “Generally the response was positive, with several saying that it helped them to understand how the black community felt about these issues.”